We have been hosting wwoofers for about ten years and have enjoyed  all that the wwoofers have done for us both in terms of work and added richness to our lives.  I would say 99 per cent of our wwoofers have been top quality workers and persons of excellent character.  So few wwoofers have been unsatisfactory that the numbers would be almost neglible. Our current wwoofer is from Switzerland and has been that type of wwoofer who not only does what she is asked but goes that extra mile. This is because she has a genuine interest in our farm and organics. She has also taught us about fitness which she studied at… Read More 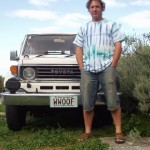 Richard, an excellent English WWOOFer who enjoys WWOOFing so much he’s gone as far as getting the license plates to prove it! Richard started his New Zealand adventures in a Volvo but this car didn’t survive after hitting a rock near to Akaroa. Bit of a waste of a nice car but it had served well by running faultlessly through most of the South Island for many months. Luckily the plates survived to live another day so are now fixed onto this Landcruiser. Richard is now travelling through the North Island, and has clocked up 16 WWOOF stays since November 2006. Richard says, “Most of the last 5 months have… Read More